The Development and Purpose of the Stock Sock

They say that necessity is the mother of invention. Well in this case that adage is undeniable. The Stock Sock from the good folks at Blue Alpha is the culmination of years of fine tuning, and constructive criticism from some great folks with solid backgrounds in the military but also citizen defenders, homeowners, and outdoorsmen from around the country.

Hello, my name is Sam Houston (no not him, he is a distant relative though) and I created the Stock Sock out of necessity as well as looking at current offerings and saying, “there has got to be something better”. A little bit about my background before I was involved in the Firearms and Night Vision Training industry – I owned and operated a small Night Vision Feral Hog hunting outfitting service in North Florida called Silent Solutions. During that time, I spent almost as much time in the Piney Woods and Palmetto swamps during the day as I did at night where I would guide clients and we would harvest feral pigs with the aid of night vision, thermals, lasers and other technology.

During the day I often scouted locations looking for where the pigs were and where they would most likely be found during a hunt. I was usually by myself. Wearing a chest rig or a belt setup to carry an IFAK just wasn’t practical for the activities I was doing but I needed a way to carry a Tourniquet or two and some wound packing material. I also utilize an AR-15 for defense inside my home and understood that I most likely wouldn’t be able to throw on a bunch of gear if my door was kicked in at 0300.  I used to see Soldiers and Police use Ranger bands or gauze to secure items to their collapsible stock on their M4 Carbines and I rigged up a slightly more modernized way with zip ties and a repurposed BFG TQ now apparatus. 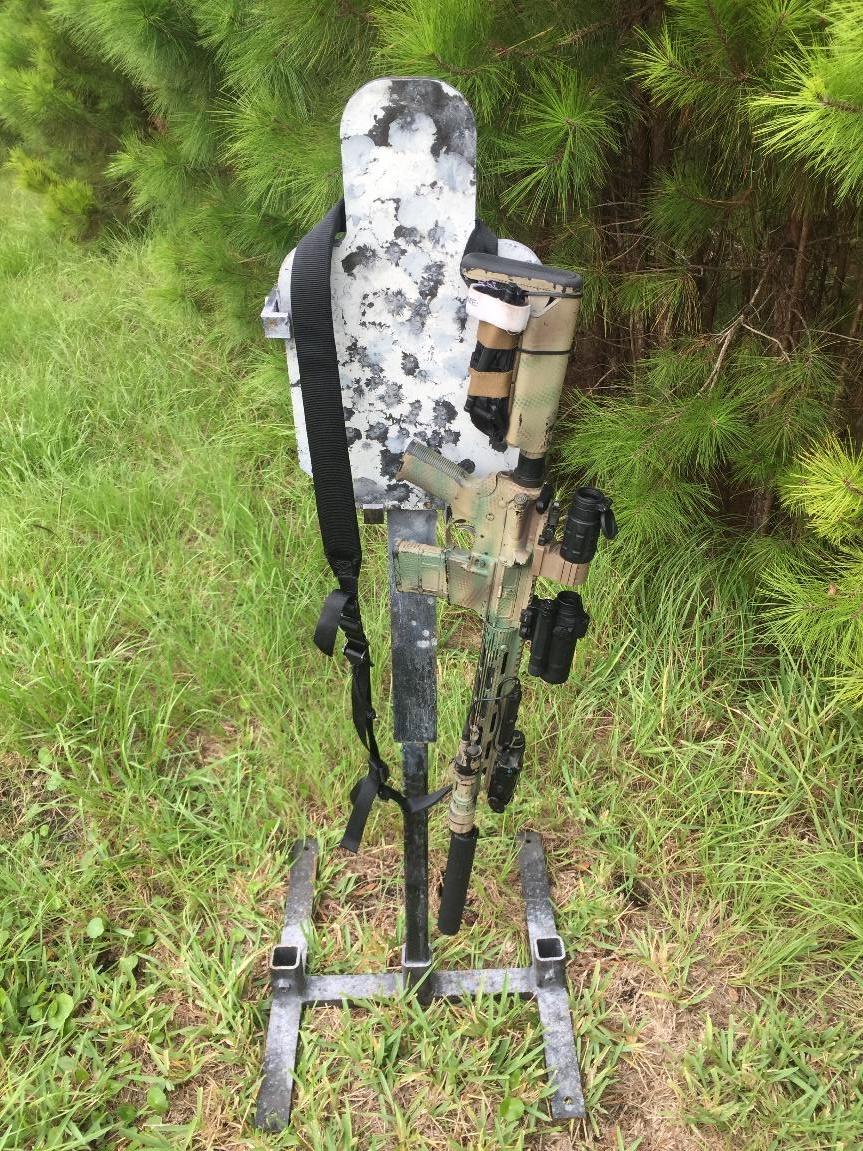 It worked but was limited to what I could carry and where.  Deep down I knew there was a better mousetrap. But how to get there? That was the question. Fast forward a year or two, I had some big life changes happen within that time frame and changed careers amongst other things.  I was working at the premier night vision company in the country at the time and was beginning to rub elbows with some industry folks. One night at SHOT show after a bourbon or two with a very good buddy who now works at Unity Tactical, I told him I had an idea for a product and sketched it out on a bar napkin. I’m no artist so feel free to laugh. 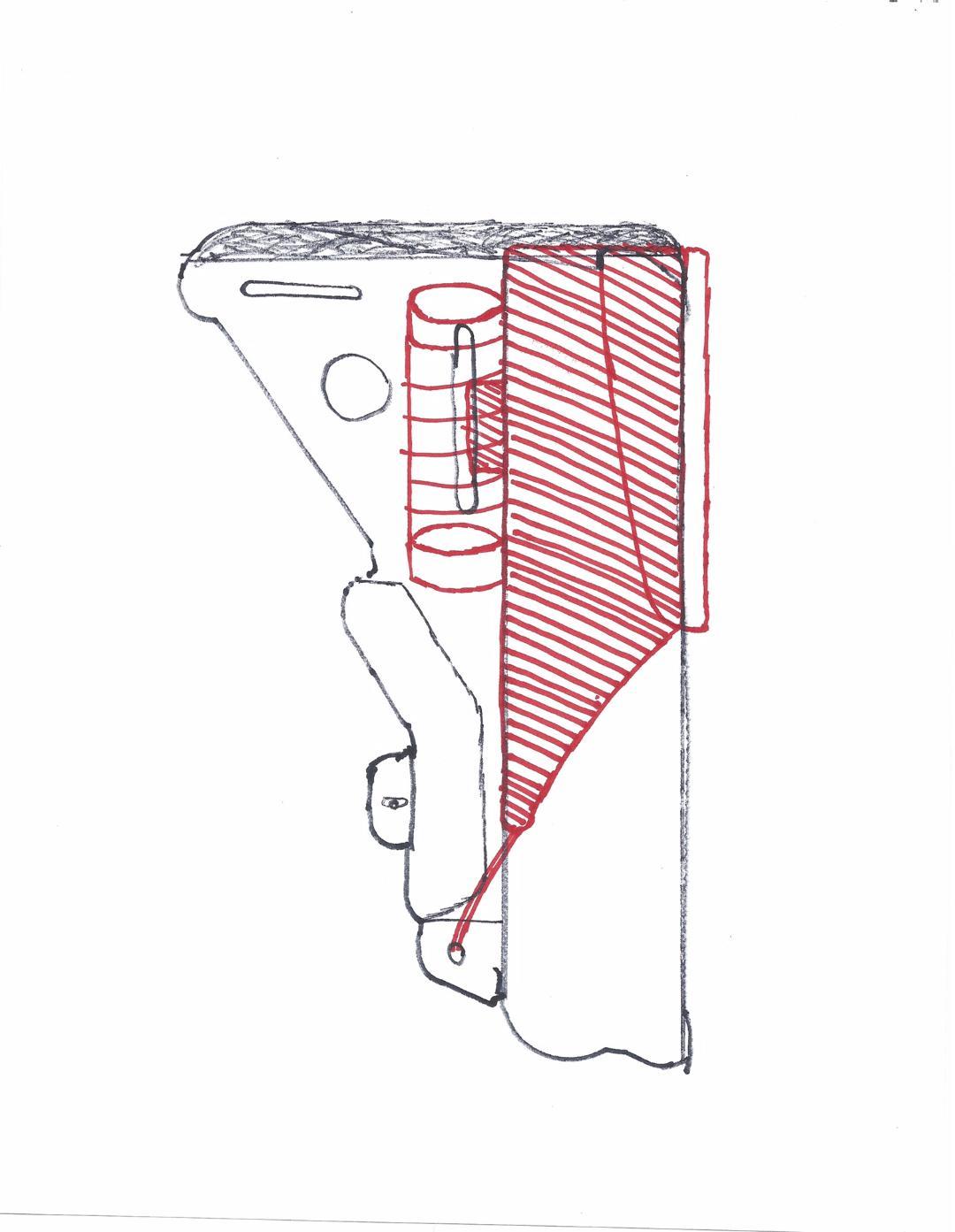 He looked at it and said he could do a rendering and polish it up a bit. A few weeks later this is what he sent me; things were moving in the right direction. 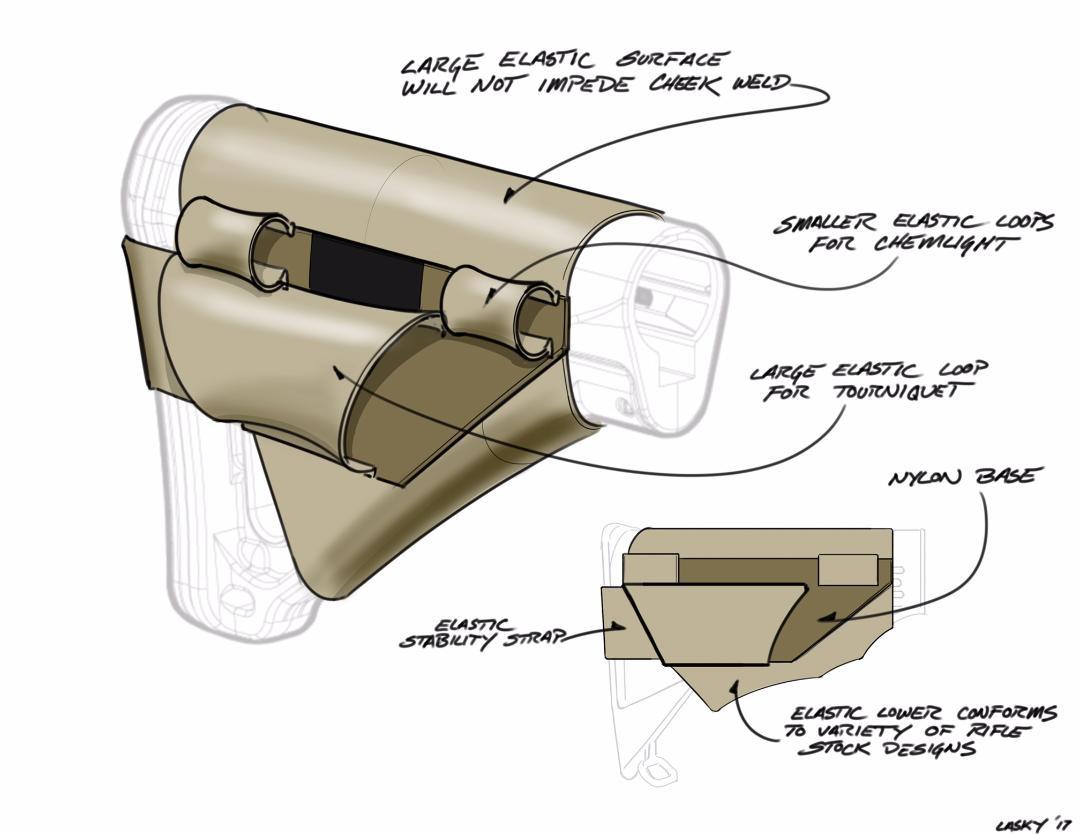 Following that, I reached out to another good friend in the industry who has a small-time sewing shop setup in his home. I had him fab up a few working prototypes for test and evaluation. I wanted to see what buttstocks the prototypes would interface with and what stocks they wouldn’t work with. Generally, these first edition working prototypes worked with the LMT/B5 Sopmod stocks, the Magpul MOE/CTR line, and your standard milspec M4 Stock but not much else. It was good, but again there must be something better, and the fact that it wasn’t very user configurable still gnawed at me a little. Additionally, the fabric drooped a little and sagged in certain areas and I didn’t like that. 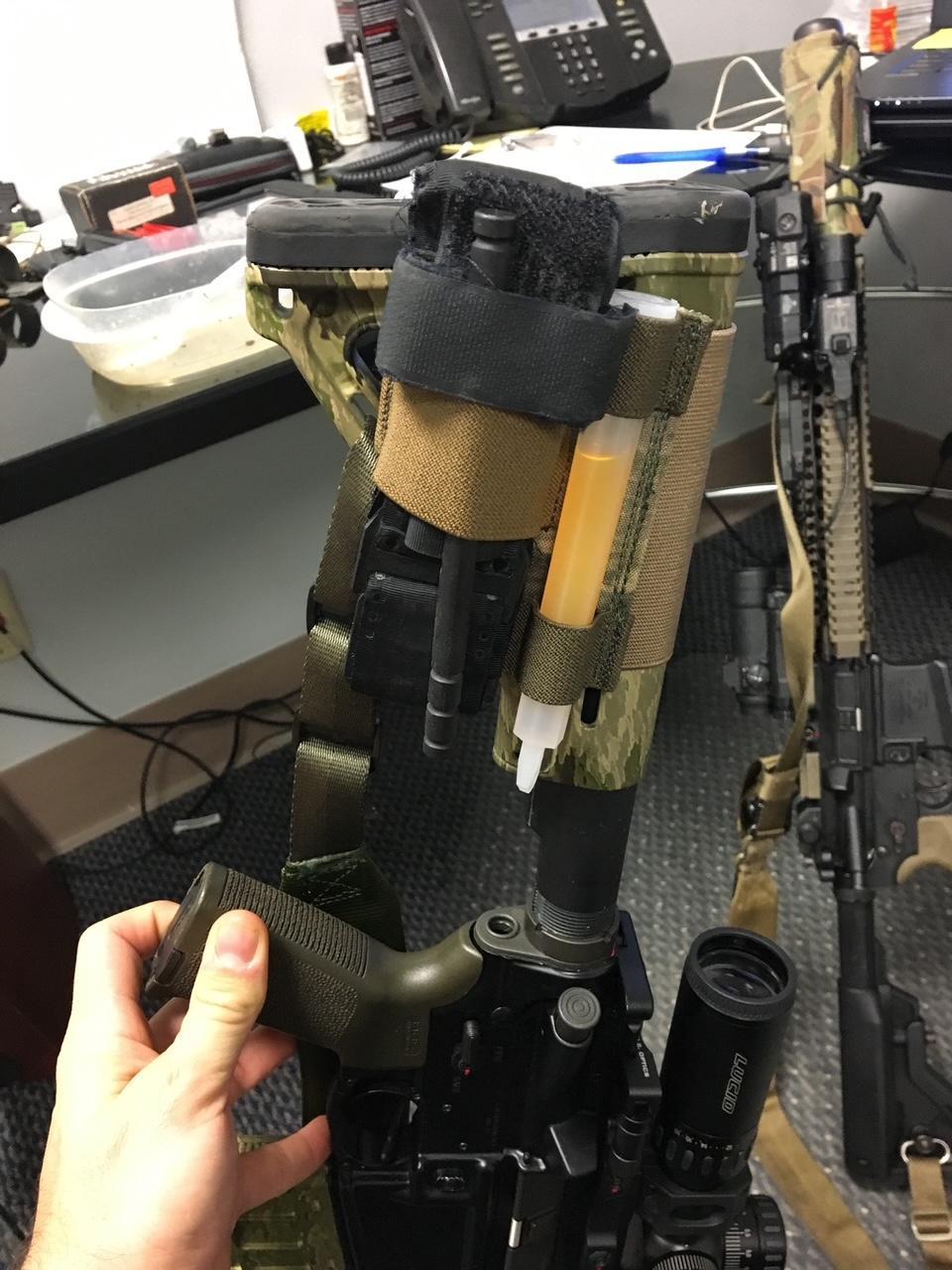 It was back to the drawing board for a few more revisions. This time I incorporated bungee/shock cord for equipment retention as it would be more configurable and user replaceable in the field. I utilized another company to fabricate several working prototypes in a few different colors for further T&E on several rifle stocks and for end user feedback from a few different known folks in the training industry.  With constructive criticism and data collected, along with some other ideas and feedback from some smart people I had in my mind what I needed.

I still faced many challenges.  Most folks do not understand what it takes to bring an idea to a full-blown production item ready for distribution to the market. That’s where some divine intervention, luck, and potentially my reputation within the industry came into play. On a routine call not related to the Stock Sock, I happened to be speaking with somebody from Blue Alpha about Night Vision. At the end of the call, I asked them if I could perhaps get a few minutes of their time to talk about an idea I had for a product. So, I gave them my 60-second used car salesman pitch and to my surprise they asked to know more. After an exchange of some emails with the rendering and concept, I was on a phone call with Kurt before I even realized what was happening.  I set up a face-to-face meeting with them at their production facility in Newnan, GA.  Once at their facility we used a software program to map out and rapid protype the apparatus incorporating some of the changes like the shock cord to secure it to the butt stock and laying out a grid pattern for more modularity on both sides to increase its configurability for the user and finally sling access ports so the folks who run their slings in their butt stocks like God intended them to be run can have their cake and eat it too. This is what we churned out as the first almost perfected Stock Sock 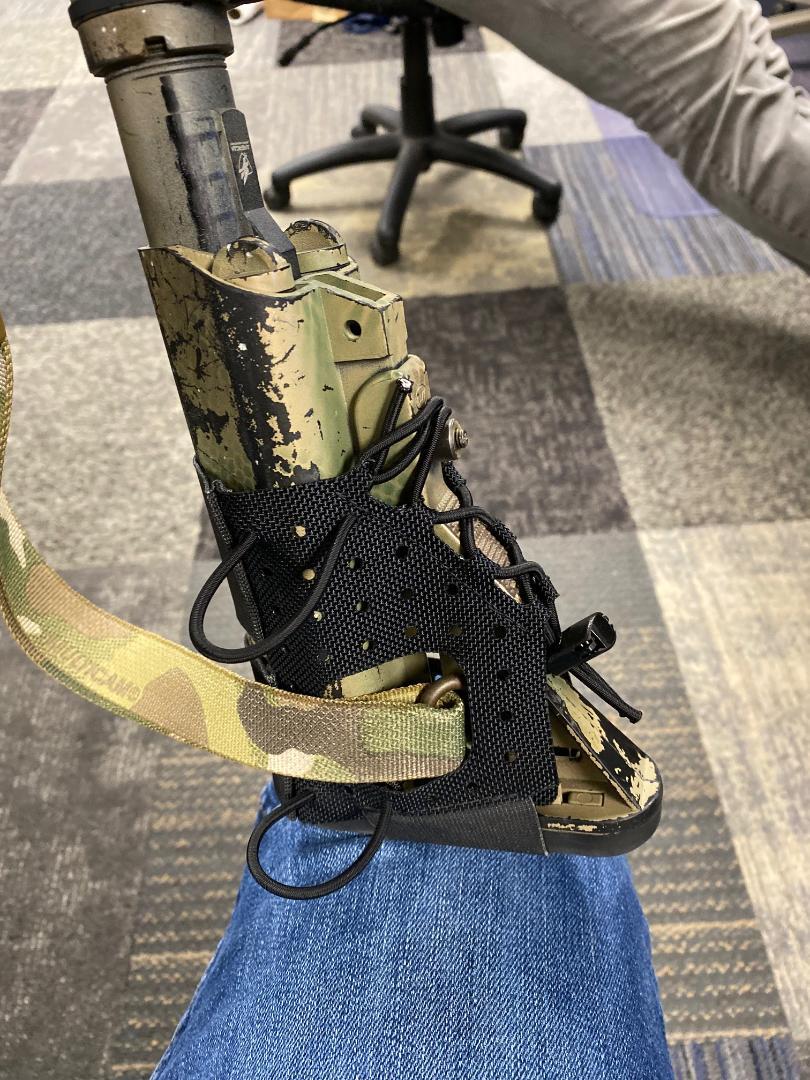 By slightly changing up the design and using the shock cord and cord lock to tighten up around the bottom of the butt stock we found that it now worked with virtually any stock and many pistol braces on the market. If the Stock Sock doesn’t interface with your butt stock, you probably shouldn’t own it in my opinion. We made a few more revisions, added some markings and a padded cheek riser and a material to keep it from sliding around on the stock and it was close to being finished. I T&E’ed the final version for about 3 weeks’ worth of classes both daytime and Nighttime, and even let students who were both right and wrong handed use it to see if novice folks had any issue. Nothing was noted or complained about. At that point I gave the guys at Blue Alpha some positive feedback and told them to greenlight it for production as soon as they were ready. It launched coincidently enough on my wedding anniversary, the 30th of April in 6 different colors with plans for some follow-on colors. 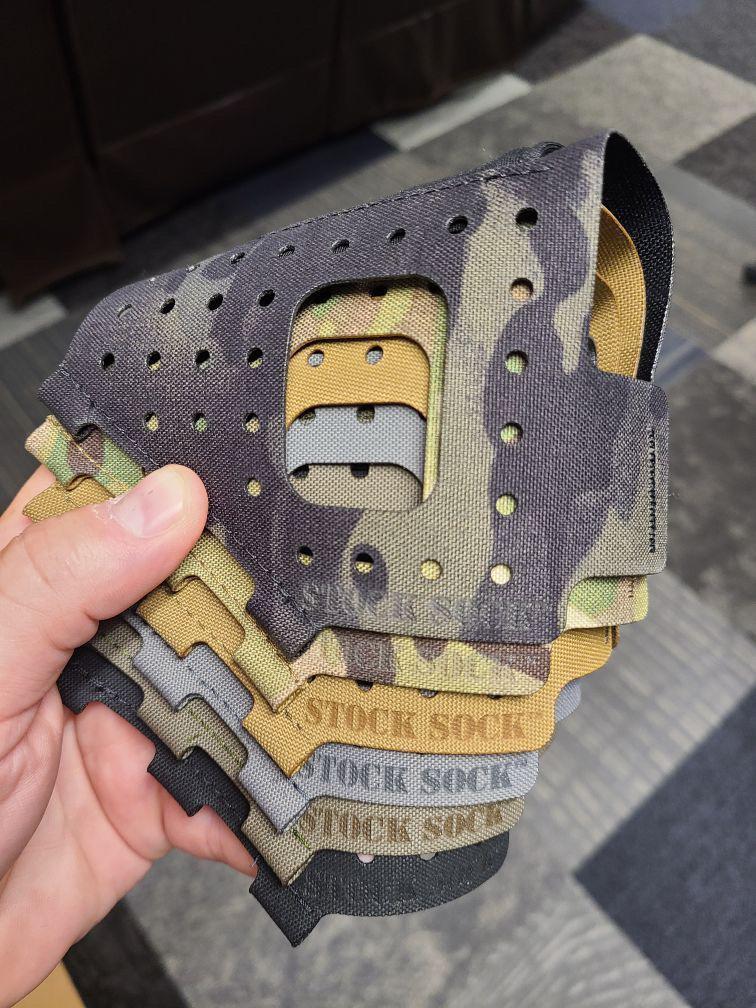 I think it’s important to keep both our training and gear contextually relevant to some extent. The Stock Sock was created for the individual who neither has the time or the luxury of donning armor, helmets, other kit and going into battle with a fire team of like-minded and equipped meat eaters. For 99% of us, it’s you and your rifle protecting your domain, or the lone patrol officer responding to a potentially dicey situation with back up many minutes and miles away with no time to wait. All gun fights are a competition, where everybody shoots open class and the winner is the one not with the best time, but with the fastest and most combat effective hits, and “you run what you brung”. If you need a way to carry some lifesaving or mission sustaining gear, then the Stock Sock might be the answer for you.