How to Set Up a Battle Belt 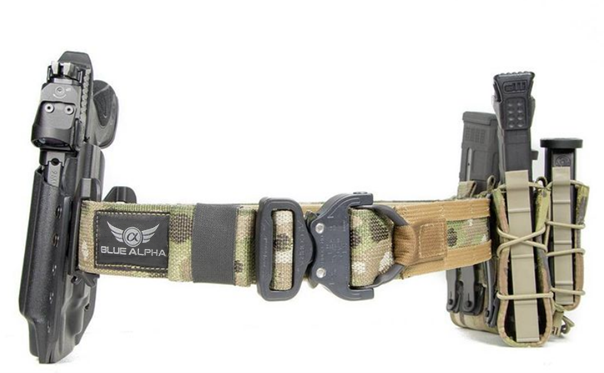 Why do you need a battle belt?

A battle belt, also known as a range belt, duty belt, or gun belt is used for many reasons. These belts are prevalent among the Special Operations community, mobile/static security contractors, police officers, and those who just enjoy getting some range time in. Depending on your needs the primary purpose could be to carry a combat load, for perfectly recreating the same holster/magazine positions every time you put it on, the ability to quickly dawn a combat load in seconds, or just for pure convenience and comfort. Regardless of your level of expertise a battle belt is a serious augmentation to any kit setup with a wide range of applicability.

What to look for in a battle belt?

If you are in the market for your first battle belt there are a few things you should be looking for. First, not all battle belts are made equal. Ensure you are purchasing from a reputable company with hand-made products preferably in America as everything is made better in the US. Second, I highly recommend going with a two-belt system. The base belt or soft Velcro is enough to hold your pants up and act as a standard belt just without the buckle.

If you plan on wearing regular jeans or pants, ensure the width of the inner belt does not exceed 1.5 inches. If the battle belt is for heavy combat loads for military or law enforcement, then go with a 2-inch outer belt. For all other uses, make sure the outer belt does not exceed 1.75 inches. The belt needs to be rigid so its form does not collapse when the accessories are attached to it. Having a molle system along the belt allows for near universal compatibility with most commonly used holsters and pouches. Lastly, ensure the belt has a cobra buckle for reliability and ability to quickly attach and detach the belt system with little to no adjustment required.

What to put on the battle belt?

Have you ever heard of METT-TC? It is the Army equivalent of saying “it just depends.”  When determining how to configure your battle belt it really does depend on METT-TC.  To avoid going down the never ending rabbit hole of every Earthly combination I plan to just discuss a couple configurations I have personally used and why.

Direct Action missions, heavy combat load, and high profile: When I was a young Ranger conducting Direct Action missions in Afghanistan my battle belt setup and plate carrier was heavy with everything I needed to fulfill my duties regardless of what may come.  During my first deployment I was assigned as a grenadier.  My plate carrier had 5 x M4 magazines, a MBITR pouch, a utility pouch, and a day pack on the back.  The pack held my water source, calories, SSE bags, chem lights, signaling equipment, and other standard items.

My battle belt held 36 rounds of 40mm, another tourniquet, small medical pouch, dump pouch, an m4 mag pouch for emergency reload, and a small utility bag that had extra batteries and such.  My M-320 grenade launcher was secured by a makeshift drop leg holster with velcro, my m4 all geared out and with a magazine (makes 7 mags total on myself for a standard combat load), a kevlar helmet with NVGs, and cargo pockets full of stuff.

On the unlucky nights I was assigned to carry the litter and on the lucky nights I was assigned to carry a ladder.  Having a battle belt helped me shift part of the load off my shoulders and onto my hips and allowed me to distribute the weight more evenly instead of stacking more magazines on the front of my plate carrier.  Stacking the front of your plate carrier makes laddering up difficult, getting over walls very difficult, and the uneven weight distribution will strain the lower back more than normal. 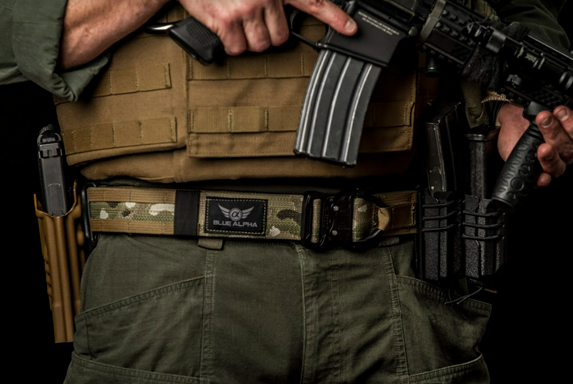 Support missions, low/moderate load, and low/moderate profile:  Fast forward to my 30s. I was conducting support missions as a Contractor in the same country but in a different capacity.  In an effort to avoid significant scrutiny while driving we had to look slick above the waist.  My body armor was concealed under my shirt and my cover shirt draped over my battle belt.  My vehicle and go bag were an extension of my person and carried a majority of my gear.  If things got bad while on foot I had my battle belt to sustain me and fight back to the vehicle.

This time my battle belt held a holster for my Glock, 2 x pistol magazines, 2 x m4 magazines, a small medical kit, extra TQ, and a handheld radio.  My rifle was covered and wedged between my seat, go bag (stuffed with munitions) at my feet, and the vehicle held large med bag and other weapon systems.  This time my battle belt needed to be slightly hidden and when on foot it was my only source to fight out of.  That means I brought only the necessities required to get me back to my vehicle quickly.

To sum this all up, there are many ways to configure your battle belt.  When setting up your battle belt consider the mission, the specific duties you need to fulfill, and the level of profile you are trying to fit.  Regardless, an overwhelming majority of these situations will require a battle belt.  Do yourself and your team a favor by ensuring you are prepared and able to effectively fulfill your responsibilities in a hasty manor.

John is a former Special Operations Army Ranger and Contractor with well over a decade of experience. He has collectively deployed 18 times to several different countries, many of which were warzones, conducting combat operations in Ranger Regiment and supporting other US government missions as a contractor.